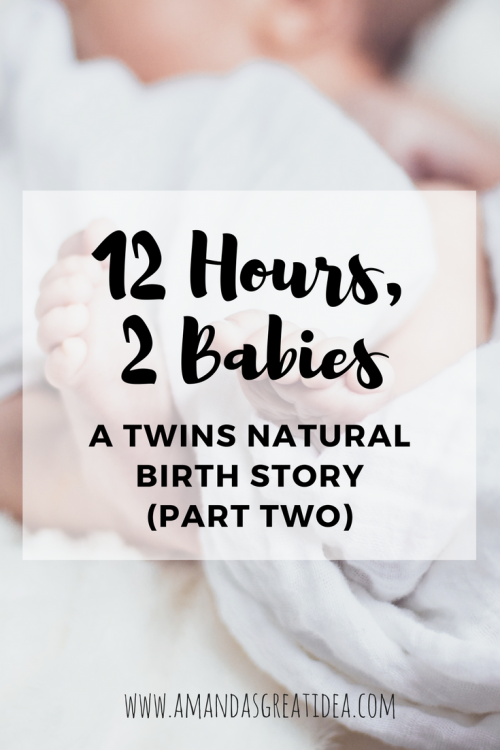 Did you miss part 1 of my birth story? click here!

(And As Corroborated By Text Message And iPhone Photo Timestamps)

3:30pm: I got settled into my room on the labor & delivery floor and soon was greeted by an Ob-GYN resident. He went over my pre-natal history, which was quite boring. No pre-eclampsia, no gestational diabetes, no complications whatsoever. Once he was through, he asked, “So, were you planning to have a c-section?” I calmly explained that if it were safe for all parties involved, and if all providers were comfortable with it, I was planning a vaginal birth. Baby A was head down, but Baby B had been breech for a while. My doctor had been fully supportive of a vaginal birth, as long as Baby B wasn’t too much bigger than Baby A, since the plan would possibly include a breech extraction and we needed to make sure she would fit. The resident nodded and said he understood. He added on that hopefully the meds would work and that they wouldn’t be born today. I told him that I had been having a few contractions, but nothing regular or too painful. He checked me and I was 3 cm. He told me that 5cm was “the point of no return.” Once I dilated that far, we would go all the way and the babies were likely coming. Chris was texting our doula the whole time with updates. At this point, we still didn’t have any imminent plans to be birthing any babies.

In order to support my decision to have a vaginal birth, the OB resident returned to explain that an updated ultrasound was needed. My most recent ultrasound was about a month old; the weights and positions needed to be updated. Since it was Saturday, I of course got the “we can call in the Sonographer from home to do this, or you could plan on a c-section.”

4:30pm: The doctors called in the sonographer. It took her maybe about an hour or so to arrive. She took me to an ultrasound room down the hall where I laid on the most uncomfortable exam table ever made. That poor lady. Once she got started, my contractions started coming faster, stronger, and longer. I could not breathe through them any more and I did quite a bit of “vocalizing” (that’s a nice term for screaming/yelling). She kept having to stop, but fortunately she got all the measurements she needed. Both girls were measuring more than 1500 grams, and there was not much size discrepancy. I was wheeled back to my room.

5:30pm: The contractions continued to come with increasing intensity. I kindly asked my nurse to call one of residents in to check me, as I was sure I was progressing. A few minutes later, I was checked, and sure enough I was between 5-6cm dilated. Shit. We made it past that “point of no return.” After several hours of trying to stop the babies from coming, the plan was now to deliver them soon! This was a huge shift for me.

Many know that I am a huge planner, so being in this labor limbo all day was frustrating. I had so looked forward to being in labor and having the full experience of delivering my babies, but up until this point, the goal had been to stop progress, not make it. With each contraction, my thought had been “no! not another one!” not because they were painful (they were), but because what was supposed to be happening and what actually was happening were out of sync. But then, when the care team told me that we were moving ahead with delivery, everything changed. We had a plan! Yes, it was not the traditional plan of “birth your babies once they’re fully cooked,” but it was a plan nonetheless. A feeling of acceptance and excitement washed over me as I prepared to meet my little girls.

5:45pm: My feelings of acceptance and excitement and impending bliss were rudely interrupted by another contraction. I pressed my call bell. “Yeah, hi. I would like an epidural please.” [A conversation for a different day, but I knew from early on that I would be getting an epidural. The same way I knew I would be delivering in an OR. My ob-gyn was so great and progressive in many ways, especially with her comfort with breech delivery. She gave it to me straight from the start, telling me that “delivering a breech baby without an epidural will not be any fun for me or you.” Plus, it’s easier to convert to a spinal if I ended up needing a c-section. I briefly mourned not being able to have an unmedicated birth, and then I moved on! The priority for me was always safe, happy, healthy mom and babies.]

6:00pm: Anesthesia resident arrives. My nurse gets me into position, and while I remember having a fair amount of anxiety about this during my pregnancy, I don’t actually recall it being a big deal in the moment. He had to stick me twice, but I didn’t mind. I rather two sticks than one bum epidural that didn’t work (right?!). The epidural is placed, and that was it. No more contractions. I’m not kidding. I thought I would at least feel something, but no. Maybe he gave me the employee special, I thought. Maybe I’m just incredibly naïve to these medications (more likely).

6:30pm: I laid around, slowly losing all feeling below my belly. I caught up on my text messages, chatted with my bestie, called my mom, etc. I sent Chris to the cafeteria to get some food for himself. He and I joked and laughed with excitement about meeting our babies. We texted our doula again with an update, who was at the other hospital attending another birth. She offered to send us her back up person, and I considered it, but honestly, I didn’t feel like I needed anyone else other than Chris there. My pain was managed, there was a plan in place, and the babies were doing well. 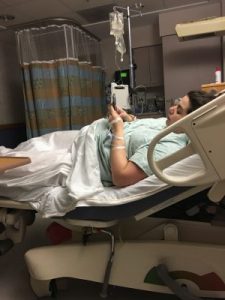 It was just a waiting game at that point. Chris and I finalized our name choices. The first names had been decided for about 2 weeks, but we had been going back and forth on middle names. Chris declared what their names would be, which ended up being my preferences. I must have squeezed his hand really hard during those contractions, since he was already giving in to me without even seeing them come out of me yet!

The doctors came in and all introduced themselves and discussed the plan, now that I was of calmer mind. My team consisted of two residents, the attending ob-gyn, and a maternal-fetal specialist physician (plus additional nurses and anesthesiologists who I would meet in the OR later). The babies would each have one team consisting of a neonatal physician or nurse practitioner plus two nurses each. I listened, took it all in, gave my opinion when needed, and realized that all these people would be seeing these babies come out of me. I was grateful for the maternal-fetal specialist, who said they would be doing 30 second delayed cord clamping for both babies, as well as skin-to-skin on my belly if circumstances allowed.

8:45pm:  After a couple of hours of feeling nothing (literally. No contractions, couldn’t feel my legs…nothing), I began to feel some pressure and sensation in my tushy. I called my nurse, and told her that I should probably be checked. The resident came to check me, and sure enough, I was 10 cm dilated! It was go time! Everything happened so fast after that. Chris got dressed in his bunny suit and my care team notified the NICU. Before long, we were all traveling to the OR. I loved seeing the transition that happened among my care team. Everyone put on their scrub caps and shoes and had a certain glimmer of excitement in their eyes. They transferred me to a stretcher and rolled me down the hall to the OR. 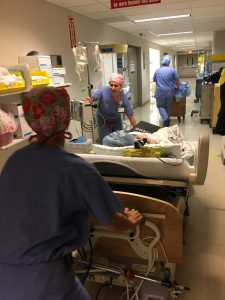 9:00pm: I got settled in the OR, on the skinniest table ever that could not sit up or adjust at all. Great. I met the rest of the team, including the just-in-case anesthesiologist. I was starting to feel contractions again (I thought), so the plan was to push with each contraction. This was challenging, as I really could hardly feel anything, but I listened to their direction and did my best. The maternal-fetal medicine doctor was so awesome. With each contraction, she held my hand and arm so that I could attempt to sit myself up to have gravity work in my favor. With that and the crew I had holding my legs, I was able to make some good progress.

9:51pm: The first fruit of my labor arrived! Reagan Jane was born and placed on my lower belly as she was assessed and suctioned. She cried right away and had great APGAR scores. They waited 30 seconds, then Chris cut the cord (and sprayed one of residents with the cord blood. Oops!). The neonatal team took her to an adjacent room for her assessment. 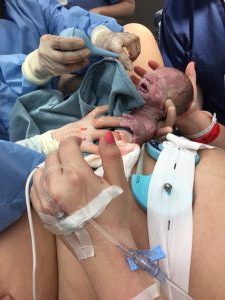 9:57pm: After handing off Reagan, the ob-gyn resident promptly reached far up into my uterus, hooked her fingers around two little ankles, and pulled baby B out by her feet. I pushed while she did all this, but it was definitely a mutual effort! Gemma Lee was born, against her will, after being tucked up nice and cozy under my ribs for the past several months (she can blame her sister later). They suctioned Gemma and she cried right away, as well. I didn’t get to hold or touch her right away; Chris cut the cord and she went with the NICU team. 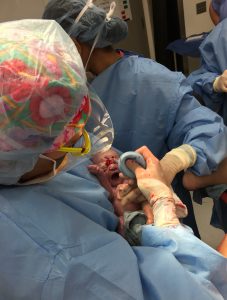 10:00pm: I delivered the placenta and it was inspected (Chris got to look at it since I couldn’t), the resident massaged my uterus (not the massage I was hoping for after all that work), and I fortunately did not need any stitches. The team wheeled each baby past me in their isolettes on their way to the NICU, and I got to reach in and briefly say hello. 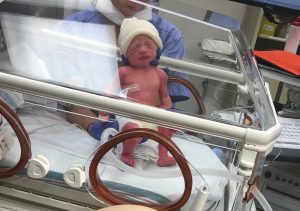 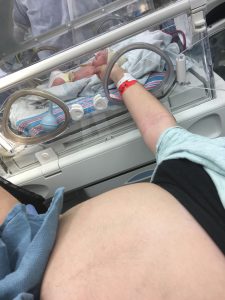 The past hour was such a blur, but it contained so many moments I wish I could hang on to. I remember the mood in the OR was so positive; I’d like to think I was that cool patient cracking jokes as she prepared to push two cantaloupes out of the eye of the needle. When each baby was born, I remember looking at Chris and we both just cried and laughed in amazement of it all. I remember the entire room cheering me on and encouraging me the whole time. It was a pretty great feeling.

As a woman with a long-time interest in reproductive health and childbirth, I always had expectations for how my labor and birth would go. Birthing ball, whirlpool tub, minimal intervention—that was all part of my vision for The Perfect Birth. While my birth was far from typical or ideal, it was MY experience, and I will always have that. Thinking back, my birth was actually quite progressive (relatively speaking)—delayed cord clamping, skin to skin, vaginal birth of twins, breech extraction! Most importantly, my babies came into this world surrounded by love and positivity, something we continue to show them every day. All in all, it was a whirlwind twelve hours, which culminated in me becoming a mom and Chris becoming a dad. We then began the stress of a 6 week NICU journey. It’s a story that I didn’t plan, but certainly not one I would ever change. 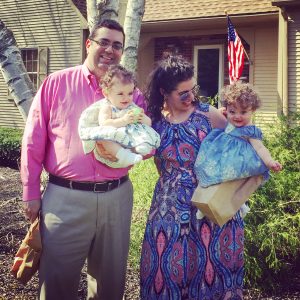