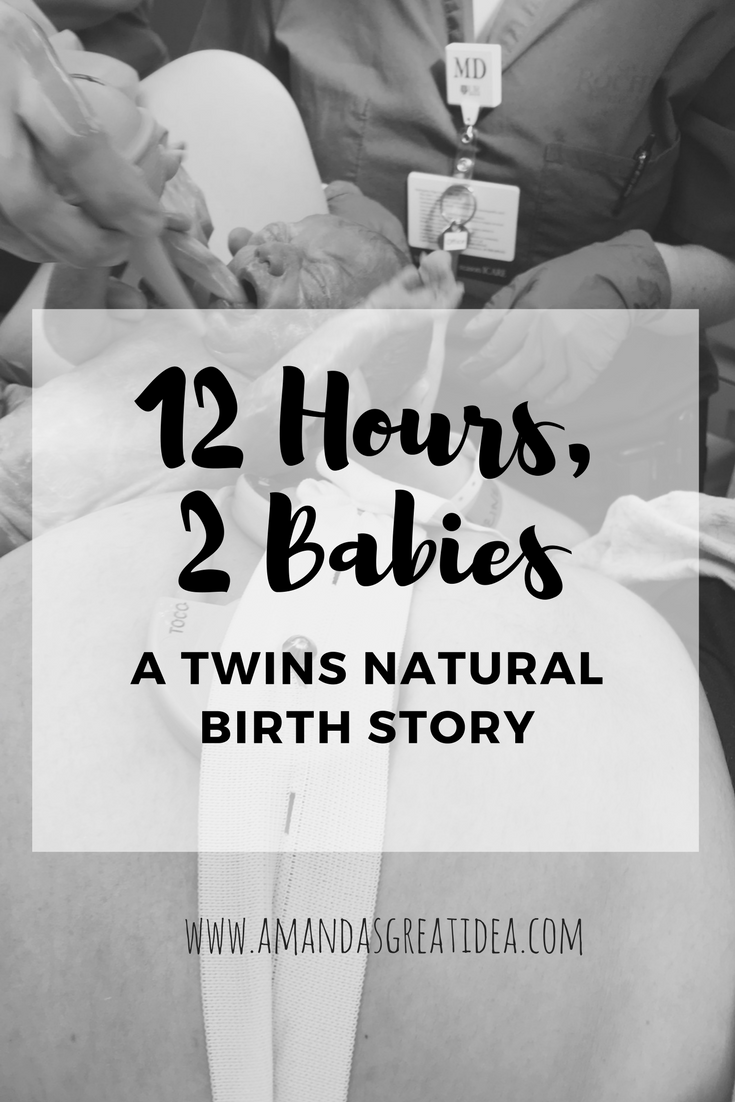 It’s taken me a year to write, but here is the story of the labor and birth of my twin girls.

Scene: I am a 29 year old female, pregnant for the first time with girl-girl twins! My pregnancy has been mostly uneventful, and I have been working full-time up until 1 week ago. I am 31 weeks and 3 days along. The following is my 12 hour transition from pregnant to mother of two!

(and as corroborated by text message and iphone photo timestamps)

7:30am: Woke up, hauled my largely pregnant behind out of bed, as I could not sleep any longer due to some sort of pain. The early bird gets the worm, so I decided to continue working on the flamingo-pink dresser I’d been painting for the twins’ nursery. I spent about 30 minutes on the floor finishing up the first coat. Husband sleeps. 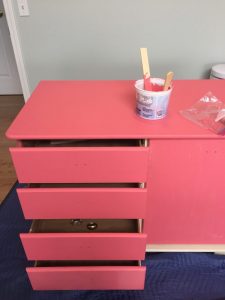 8:00am Transferred myself to the couch, where I laid for about an hour. I remember being kind of achy, but attributed it to getting my tetanus shot the day before at my OB appointment.

9:30am: My loving husband, fortunately off from work, prepared us a delicious brunch fit for the pregnant-est of pregnant. Not just French toast. Not just grilled cheese. But French Toast Grilled Cheese (deserving of all capital letters). With Bacon. I praised his breakfast making abilities. All is well.

10:30am: I decide it’s time to plan out my day. It’s going to be a busy one: shower, then nap, then some online shopping and Netflix binging (Gilmore Girls-why did I not watch this show when it was on??). After a delightfully hot shower, I climbed into bed for a nap. As a turned over in bed to get comfortable with my Snoogle, I heard and felt a pop down below, followed by a large gush of fluid. I woke Chris up and had him investigate the situation. I knew my water had broken—I just used the restroom and had no issues with incontinence the whole pregnancy. There was no blood—thank goodness. I was so scared to move. I very calmly gave my phone to Chris to call my Ob-GYN. It was Saturday, so I knew we were going to have to deal with the answering service. “What do I say??” He asked. I grabbed the phone and gave my name and date of birth to the answering service and let them know I thought my water broke. I was told I’d get a call back in 5 minutes, which I did.

One of the PAs called me back right away and I gave her the story. Hi, my name is Amanda and I’m 31 weeks and 3 days pregnant with di-di twins. I just rolled over in bed and experienced a large gush of fluid. I think my water broke.” “Blood, pain, contractions?” “No, no, no.” She said she would talk to the attending and call me back, but to plan on coming in soon. In the next 5 minutes, I put on Depends underwear (thank you, Megan), and had Chris pack a hospital bag for me only. That had been on the to-do list for that weekend. Oops. I remember telling him to just pack me a couple days of clothes and toiletries, since I knew having my water break this early meant I was going to be admitted and put on hospital bedrest until the twins came (which I was convinced was going to be another month).

The PA called me back. “Ok, I talked with the doctor. We want you to head into Hospital A to be checked.” Wait, what? Hospital A? I knew already that my doctor’s only delivered at Hospital A, but I also knew that babies had to be 34 weeks along to be born there (since there was no NICU). “Sorry, don’t you mean Hospital B? I’m 31 weeks along…with twins.” “Yes, I understand. The doctor wants you to come see us at Hospital A before we make any decisions. I’ve called ahead and they are expecting you.”

11:30am: My bag is packed and we are in the car on the way to Hospital A. Apparently Chris drove like a maniac and we got there in 18 minutes (it usually takes 25 minutes). I texted our doula on the way and told her what was up. I didn’t tell her to meet us at the hospital, because water breaking doesn’t always mean labor. About halfway there, I felt what I thought was a small contraction. I had been experiencing Braxton-Hicks contractions for a few weeks now, but this was different. The BH contractions were completely painless, but this one felt crampy. Good thing I had those Depends underwear on, too; I’ll leave it at that!

Chris dropped me at the door; I walked up to the Labor deck while he parked the car. I checked in and by the time he got in from the garage I was taken back and put on the monitor. An OB resident came in to evaluate me; she examined the nether regions and confirmed, “yes, it appears your water DID break” (oh really? I’m shocked) “and you are 2cm dilated.” Now, I had known that I was already 1.5cm dilated as of 4 days prior, since I had gone into my doctor’s office with persistent Braxton Hicks contractions, and was subsequently taken out of work since I was having cervical changes. The OB resident explained, calmly, that I was in pre-term labor and that they would need to give me antibiotics and medication to try and stop labor. I would need to be transferred, by ambulance, to Hospital B (also my place of employment) 2 miles away, “since we don’t deliver babies here less than 34 weeks, and you need to be at Hospital B in case your labor progresses.” Does this sound familiar? Anyway, we made a perhaps unnecessary pit stop at Hospital A, but the babies weren’t in any distress, and that’s what was important.

They loaded me up with nifedipine, IV magnesium, and antibiotics, since I hadn’t yet had my routine Group Beta Strep test (usually done around 36 weeks). The IV magnesium was absolutely awful—it made me achy and nauseated and so so flushed. It was also a bit sedating but I muscled through…I was willing to do anything possible to keep labor from progressing. They also shot me in the tush with steroid shots to help the babies lungs mature in case they were born before 35/36 weeks (when surfactant is produced). Before I knew it, the ambulance was there to take me down the street to Hospital B.

2:30pm: The ambulance ride was quite uneventful, which I hoped meant the medications were working and my labor was slowing down. Chris took his car and met us there (and probably beat us there). Fun fact about Hospital B—ambulances have only one entry point: the emergency department. All emergency patients and transfers come through this entrance. I work in the emergency department as a provider, and it was not my finest moment, but alas I was rolled into my own department and greeted by co-workers (who thought I was the trauma they were expecting)—“Oh, Amanda, is today the big day?!” “Hopefully not!” was all I could reply.

This website uses cookies to improve your experience while you navigate through the website. Out of these, the cookies that are categorized as necessary are stored on your browser as they are essential for the working of basic functionalities of the website. We also use third-party cookies that help us analyze and understand how you use this website. These cookies will be stored in your browser only with your consent. You also have the option to opt-out of these cookies. But opting out of some of these cookies may affect your browsing experience.
Necessary Always Enabled

Any cookies that may not be particularly necessary for the website to function and is used specifically to collect user personal data via analytics, ads, other embedded contents are termed as non-necessary cookies. It is mandatory to procure user consent prior to running these cookies on your website.